If you can't tolerate critics, don't do anything new or interesting. Jeff Bezos

The success story of Jeffrey Preston Bezos is identifiable by different people around the world. His ideas, which have transformed a garage shop into a large platform that sells almost anything found around the world, are the inspiration to a lot of entrepreneurs today. It shows a clear example of how ideas and persistence can lead to productive results. The desire to start a business is more vital than the starting point.

The history of Amazon dates as far back as 1994. The beginning of the business should not create huge feedback. After setting the goal to develop the global platform for sales, he decided to start simple. He did this with goods that require just a little storage space, hardly get spoil, are easy to move around and are in demand. It is quite common to find online bookstores nowadays, but then it was a very risky gamble.

In the first instance, everything was based on Jeffrey’s savings. All the equipment were classic and comprised a garage, a hand-made table, an old computer, and a server. All these were quite modest and did not look very much like a successful project which would end up employing thousands of staff and occupying huge buildings. 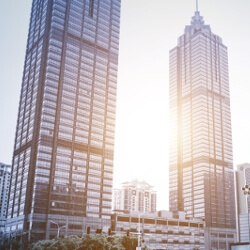 to note is that Bezos is the founder of product reviews. It was a risky feature and investors refused to accept it. They felt negative feedbacks could create a bad effect and cause a drop in purchases. However, Bezos was sure about the success of his idea. Thanks to personal interaction with shoppers, they were able to deal with people and not machines, making them able to communicate their shopping experience. The idea had become a success.

If you do build a great experience, customers tell each other about that. Word of mouth is very powerful. Jeff Bezos

Evolution of the project

Since the creation of the store in 1994 and till the beginning of 1997, Amazon shares increase by tens of millions of dollars. Investors proceeded to make contributions on the development of Amazon based on the firm’s potential.

Bezos spent money on his business. He has spent on the development of the company and advertisement despite attempts to crumble the store from competitors through lawsuits. The fact that the firm did not create income for investors for a long time did not discourage Bezos. Without a lot of spikes and breakthroughs, the capital of the company and the assortment increased. From recent indications, it has provided results. Amazon has become a vital organization with an annual turnover of about $20billion and a net profit of approximately $0.5billion. It has already become an online empire but began with just a wooden table and an old computer, managed by a talented person known as Jeffrey Bezos.

Jeffrey Bezos is a clear indication that if you believe something and set your goals – you should not be discouraged from it because the bar seems to be too high.

You may also be interested in the following related posts:

If you have any questions, please write a comment below the article or contact our support team.